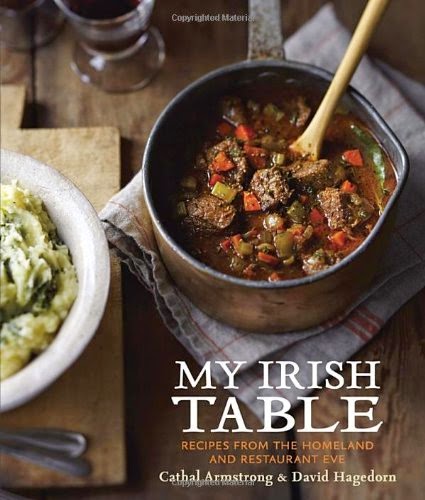 My Irish Table: Recipes from the Homeland and Restaurant Eve by Cathal Armstrong & David Hagedorn is a love letter to Chef Armstrong’s homeland and to his parents. The cover invites the foodie reader to open it up and savor the memories and flavors of Ireland with it’s bowl of mashed potatoes and copper pot of Irish Stew.

If you love Ireland - either through virtual or actual travel - you’ll truly appreciate Chef Armstrong’s homage to recipes of his homeland. To know that leg of lamb is traditionally served on St. Patrick’s Day made me smile. Discovering that Irish Soda Bread is a relatively recent (19th Century) staple, fascinating. But to cure my own corn beef? Highly doubtful.

At this point, I’d like to point out that this cookbook may be intimidating for the novice or hobby chef as many of the recipes are a bit complicated. Serious foodies and chefs won’t find them a problem, but when I consider curing my own meats for a recipe, I’m truly daunted at the prospect. That said, I realized that a novice could definitely create the dishes, but use their supermarket and gourmet food store handily. While the final product might not be quite the way Armstrong envisions, it probably is more realistic. And I’m sure the meals will be delicious.

To say that Chef Armstrong’s personal story is inspiring is an understatement. It’s clear that he was given a precious gift by his father, who was the household cook and gardener. As he noted, this was indeed unusual for an Irish household of the time, but his father was the chef and their Dublin garden produced the fresh produce that is the basis for all the dishes. As it was in Ireland, so it is in America, as Armstrong’s Restaurant Eve features its own garden in the Old Town Alexandria. Honored by the President for his initiatives, Armstrong is a passionate spokesperson for local sourcing. (And yes, vignettes about the President’s visit to Restaurant Eve are fun to read.)

However, what captured my attention were the recipes from his mam and those that highlighted holiday meals. I’ll admit to being totally overwhelmed by the breakfast section as I doubt I’ll ever be curing my own bacon, preparing my own sausage, or actually eating these on a regular basis. However, I will be making some of the orange marmalade as well as the cooked tomatoes. 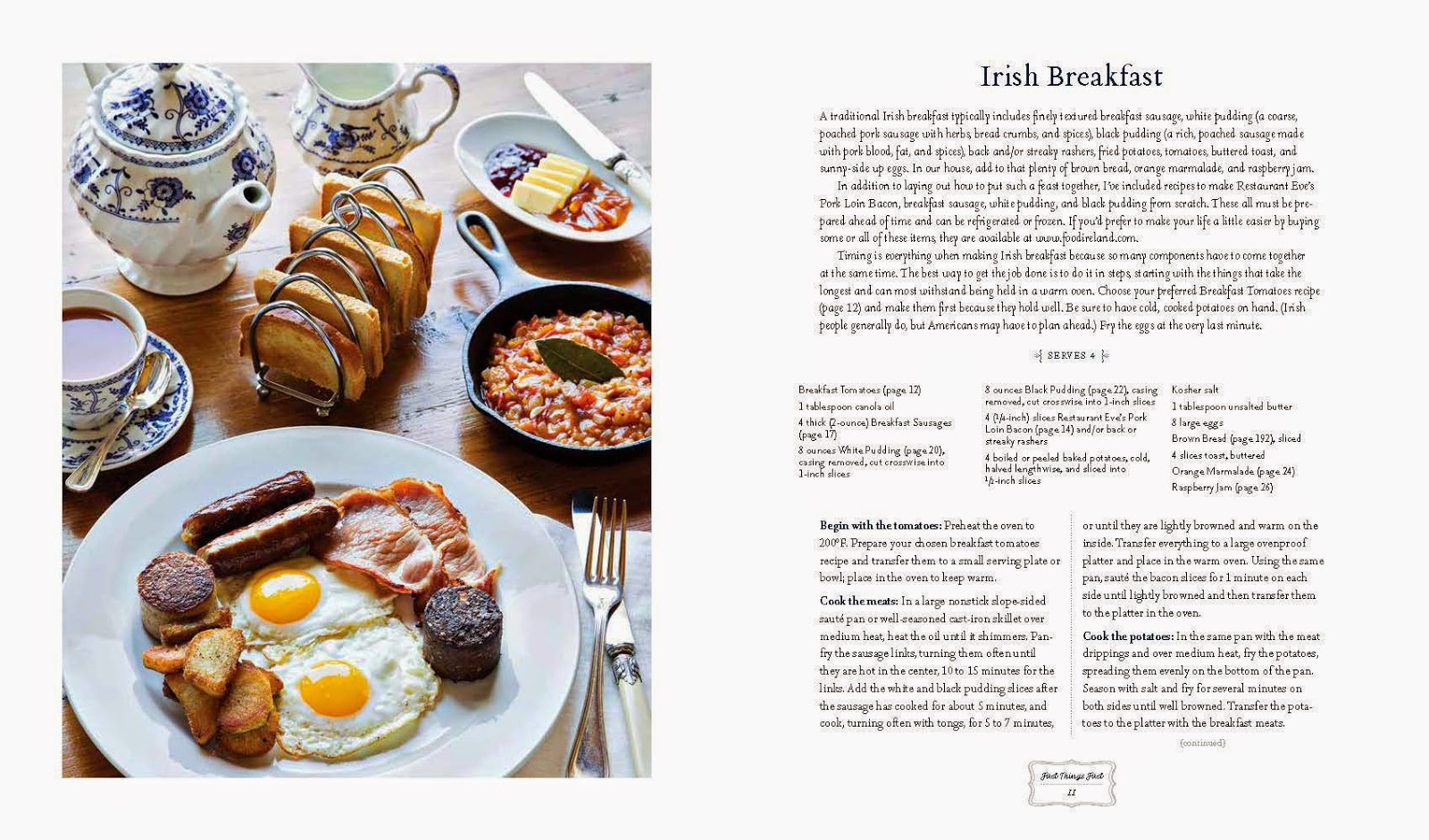 With each of the 130 recipes, Chef Armstrong shares a story and in doing so invites us into his world. While I may not decide to recreate each of these dishes, I know that I’ll be using this book as a future reference. Perhaps I’ll go to it when reading a novel and needing to remember by white and black pudding are.

Recipes in My Irish Table also give away secrets. Traditional Irish Stew features lamb, not beef (see the recipe on Amazon). Corned Beef is a favorite dish of Halloween, a holiday that is widely celebrated in Ireland (another fact I didn’t know, but which makes sense with the Celtic pagan heritage). I can imagine authors using this book as a reference for when they write about Ireland as it provides far more than just recipes, but a real sense of this homeland for so many.

My Irish Table is also a bit of a love letter from Chef Armstrong to his wife Meshelle and their two children, Eve and Eamonn. Written with Washington Post food writer David Hagedorn, this cookbook is a delight to read. Truly for the stories as much as for the recipes themselves.

Once again I received an early version of this cookbook as an electronic galley from the publisher and just now received the hard cover. Which would I recommend to you? Without a doubt the hardcover. Although almost my entire library is now digital, I could not appreciate the scope of this book in the electronic format. While each transmits the same information, the joy of this book is in paging through it, being captured by one of the fabulous photos by Scott Suchman that so joyously illustrate many of the recipes.

I’ll definitely be returning to this book again and again and trying out some, but certainly not all of the recipes. However, I’ll read each one and hope to visit Restaurant Eve someday to taste Chef Armstrong’s dishes in situ. 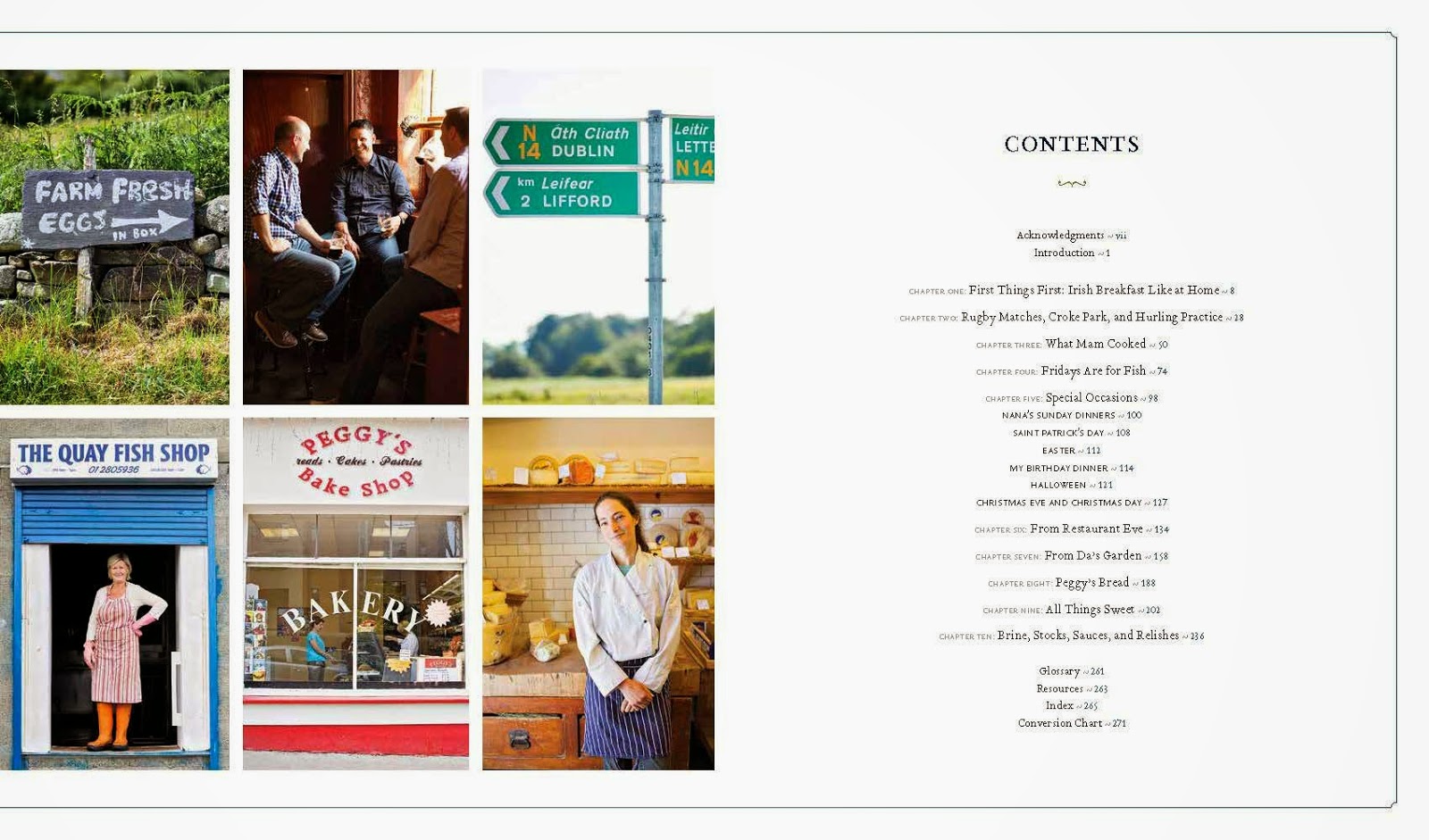 If I were to pair this cookbook with some romances, some authors and books that come to mind are: Nora Roberts' many titles set in Ireland, including her Cousins O'Dwyer Trilogy; Sophie Moss' Seal Island Trilogy; Carla Neggers' Sharpe & Donavan and her Irish series; Karen Marie Moning's Fever Series, among many, many others. (Yes, I love to read about Ireland. I. Do!)

If you love Ireland and its cuisine, My Irish Table: Recipes from the Homeland and Restaurant Eve by Cathal Armstrong & David Hagedorn is a must-read addition to your cookbook shelf.

My Irish Table: Recipes from the Homeland and Restaurant Eve  Written by Cathal Armstrong & David Hagedorn

The debut cookbook from Cathal Armstrong featuring 130 recipes showcasing modern Irish fare, along with stories about Armstrong's journey from Dublin to Washington, DC, and becoming an internationally recognized four-star chef, the owner of seven successful food and drink establishments, and a leader in the sustainable-food movement.

With its moderate climate and amazing natural resources, Ireland is a modern-day Eden, boasting lush, bountiful produce, world-renowned dairy, plentiful seafood, and grass-fed meats. In My Irish Table, sustainable food movement leader and four-star chef Cathal Armstrong celebrates the food of his homeland and chronicles his culinary journey from Dublin to Washington DC, where he runs seven beloved and critically lauded restaurants.

Featuring 130 delicious recipes—from Kerrygold Butter-Poached Lobster with Parsnips to Irish Stew, Shepherd’s Pie, and Mam’s Apple Pie—My Irish Table draws on Armstrong’s Irish upbringing as well as his professional experience and French culinary training. In his hands, Irish food is comforting yet elegant, rustic yet skillful, and My Irish Table invites you into his kitchen to explore the vibrant traditions and rich culinary landscape of the Emerald Isle.

I received this book from Blogging for Books and from NetGalley for this review.
My Irish Table: Recipes from the Homeland and Rest Cathal Armstrong David Hagedorn Ireland Cookbook Ten Speed Press Random House
Source: http://www.fabfantasyfiction.com
Tweet